Well this was not a kitten 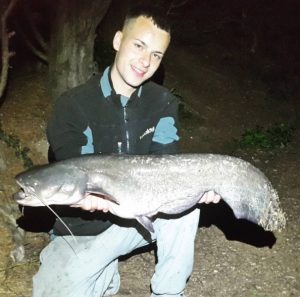 So it was our first time chasing down Wells Catfish and everything seemed to start really slow.
Muzz and I headed off out to a commercial lake called Jimmys Lake in Essex. Despite the place being an absolute dump we decided to stay and give it a go. With four rods out in total we tried different methods to snag a cat. I rigged up with a running rig with a offset 2 oz weight and a 40 lb fluorocarbon hook link and hair rig. The bait of choice was large chunks of lunch and meat and large pellets. Muzz using 21 mm pellet and I opting for 30 mm pellet to eliminate carp taking my bait. Once we set up and the rods were out we settled in for the night. The silence was broken at about 3am with what I would describe as a “bream bite” however we watching the bobbing dance up and down for a while until Muzz plucked up the courage to strike the rod. When he did he then felt a massive lung to the right and it was then we both knew that he had a cat on the line. after a short battle in the middle of a very hot summers night we slipped the net under a whopping 18 lb cat. We knew it was a lot bigger than we had hoped for and we was really over the moon with the catch. After this the dust settled and apart from a screaming run on my meat rod at about 7 am nothing else happened at all. We decided to call it quiets and we would regroup and give the cats another go in the near future.