Well my big trip to the USA was fantasist! 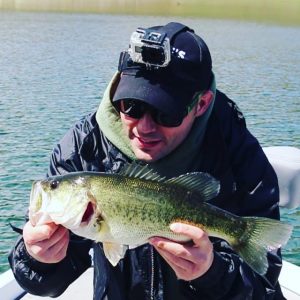 I started my trip in Los Angeles where I found a really good tackle shop called Pro Bass shop. Now I assumed that it was just going to be tackle for bass fishing but how wrong was I?
I know that the Americans are famous for doing everything bigger and better but these tackle shop are out of this world. From swivels to fishing boats they had the lot. I would recommend any angler to go and take a look when you are in town. Now that I had stocked up on tackle that I didn’t need I headed out to a beautiful mountain lake called Lake Casitas about an hour and half drive just north west of L.A. Once there I teamed up with a lovely fella called Rich Tauber who is a pro Bass fisherman and he holds a few records and some top fishing tips and tricks to make sure you have a fish filled day. As I suspected Rich put me on the fish and it was not long until we started to hook into some 3lb plus fish. For this time of the year the fishing can be a little tricky as the mornings and evening are cold as the fish can be a little less active but as the mid days sun warmed the water the fish started to get on the much and we was very happy to finally see them. I broke my Bass duck with a nice sized fish of over 2lb. The day was over before it started and I then had to bid Rich a farewell. But he gave me some soft plastic worms and some tips on how to fish for the bass from the waters edge. Armed with this new information and tackle I headed back to L.A and decided to target a lake within the city called Echo Park Lake. Now the lake record is 10lb and nothing like the fish in lake Casitas but it was free to fish (proving you have a fishing license) and it was all good sport.

In typical Wayne’s World Fishing style I was against the clock as I had a plain to catch back to gloomy old London. So with that in mind I made sure I fished the lake hard and covered as much ground as I could. Making way through the all the crazy people and homeless I found a few spots that looked so fishy I just had to have a go. It was not long until I hooked into my first Bass. No it was not a whopper just 1.5lb but my first Bass on my own. I now had the bug and wanted to keep going. I hooked into another Bass but this time even smaller. With time and sun light running low I had to pack up and wave goodbye to America and with a heavy heart I board the plain. However looking out the window on the plan and thinking about my amazing trip across California all I could think about was the fishing and when I could come back to hook into some more monster American Bass. 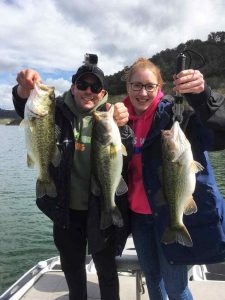