Once again Chesil was hard! 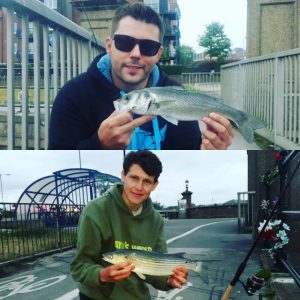 We got to Weymouth for about 8am. As always first stop Chesil bait and tackle. Stocked up on baits, but we had to come back later that day for live peelers as their delivery had not arrived yet.
From there we headed down to the harbour once again to target the Mullet. This time armed with a bucket of bread and bran we thought that we was in with a fighting chance. Using bread on a small size 8 hook and a small crystal waggler float as not to spook them, we tried and tried but in typical Mullet fashion they just would not take the hook bait. We then headed up to the far end of the Harbour where there is a tidal wall to stop the salt water going back up the into Rapidpole lake. We found loads of Mullet swimming around in this area. So we set up there and tried to snag one. After a little while attempting to catch a Mullet my friend Kyle said that he was sure he saw a Bass and with that in mind the lure rods come out. After what seemed like forever jigging a small shad up and down next to the tidal wall I finally got a WHACK! but it was only a small shoolie. In typical bass style it went like a train and was landed without any problems. Kyle on the other hand was still trying to get the Mullet. He succeeded to pull out two over all. No monsters but fish is a fish.
Enough was enough and we headed back to the beach for high tide with our fresh bait. Once over the shingle we were hit in the face with 20 mph SW winds and loads of weed. After giving it about an hour of our best and just pulling off dragons tails of weed off the line we decided once again Chesil had the hump with us and we should let her simmer down and come back to fight another day.