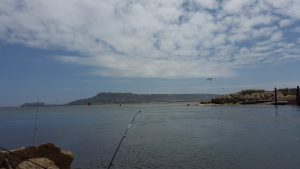 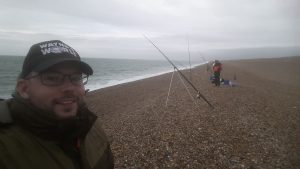 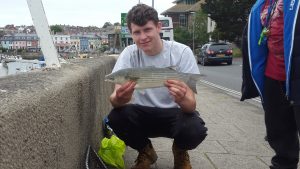 First off as always I stopped off at Chesil Bait and tackle. The lads in there are always so helpful they always have good and updated catch reports and helpful tips on how and where to fish. However this time no fresh peeler or hermit crabs they had all sold out. Not to worry we had a real old mixed bag of frozen baits and some fresh rag worm for the wrasse.
We headed down to Portland Bill and sat on the rocks for about 2-3 hours targeting the wrasse with the worms. The weather was not on our side with winds of over 30mph it was hard to say the least, however the kite surfers seemed to love it and made good use of the super strong gusts. As always we did have a couple of wrasse but nothing like what we are used to along there. I am sure this was due to the massive swells and high winds.

After that we headed down to ferry bridge and tried to see if we could get a bass on lures. After using ever type of lure we had in our box we cough nothing not even a schoolie. So bored out of our minds we decided to see if we could find some fresh crab as it was low tide. We found many good crab among the rocks and weed and a few of them were peeler so a bonus all round.
Still with loads of time in front of us we were supposed to hit the beach 3 hours up tide and 3 hours down tide later that evening we decided to go and get some fish and chips and maybe a sneaky beer

Down at the harbour we saw all the mullet swimming around the boats and the temptation was just to great not to try our luck and see if we could get one or two. Armed with a loaf of bread we tackled them head on.
Now I know why they say that mullet are one of the most frustrating fish in the sea to catch. Missing three bites we finally hooked one. Not the biggest but a good scrap, a quick pic and back she went.
The time had come to head to the beach. Three of us in total two rods each armed with crab, lug worm, blueie, sandeels and squid we fished the rising tide for three hours and NOTHING TO SHOW FOR IT!
The fella to our right pulled out a 7-8lb smooth hound and this filled us with hope but not even a nod nor a crab eaten bait. Completely defeated we headed home with our tails between our legs. This was the first time Chesil as been hard on me but I know its just a lovers tiff and I will be back on talking terms with her again soon.