Just a few hours before work 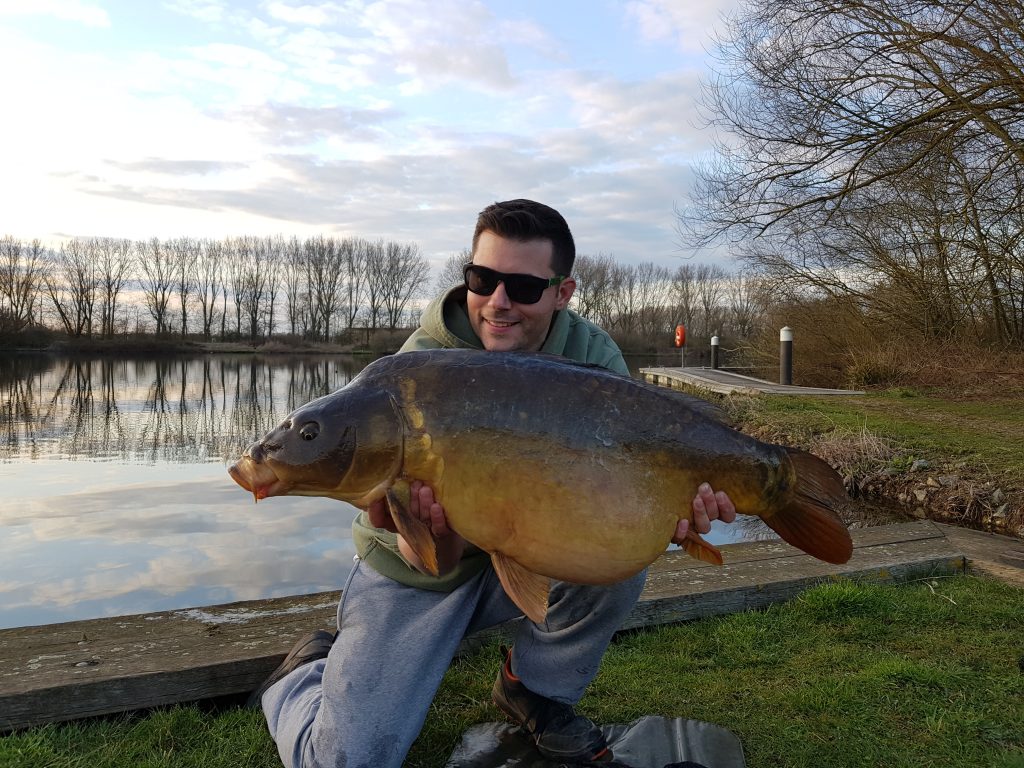 Well it was supposed to be a few hours before work and I had no idea what I was going to find.
Getting my tackle out of the van in the car park I bumped into a fellow who had just finished fishing for the day. He had been lure fishing for the perch with no luck. I to had set out to target the perch but he noticed that and stopped me in my tracks.

The fella was called Jamie and he said that he had been fishing all day with no luck however he had seen a lot of big carp on the move in the far corner of the lake. I said due to the small warm spell in the weather we was having it may have woken them up from their winter slumber and finally started getting them on the munch for the coming spawning season. With that in mind I pulled out the Nash Dwarfs and set out to see if the carp would play with me.
Kyle called me on my way and said he was only up the road at another lake just riding his bike doing a little recon so I said come and sit with me and see if we can get a carp on the bank. Within 30 mins he was by my side and we had started to set up. Noting over complicated just a single 15 mm mainline milky toffee pop-up on a Ronnie rig with a small PVA bag of crushed boilies cast out into open water about 75 yards and on the other rod a 15 mm mainline essential cell wafter hair rigged to a size 6 cryogen curved hook set to the right of the swim at a small point with a few boilies scattered around the hook baith with a easy under arm chuck.
20 mins in and the toffee pop-up screams off, I had hooked into something big and this fish was like a train. It kited off to the right hand side of the swim where a platform and snags where located. I knew that the fish knew this was where we would be in trouble. I lock up and still the fish peeled off line. This was getting my hear racing and I knew this fish was a good size. Like a Thomson gazelle Kyle jumped onto the platform and run up the where the fish had now buried its self into the snags. Shouting back at me he said “its a common around 25 lb I can see it going around the post” Passing the rod under and over the platform and around the support post to keep up with the fish we finally realised that the carp had shaken the hook. Completely gutted I walked back to my swim thinking maybe its time to go home. Kyle said give it until 7 pm and then we will go. So with another hour on the clock we decided to give it our best shot. With the wafter rod still out and untouched I put another 15 mm toffee pop-up on and both roads where now back out fishing. Kyle got board and walked off to look for Pike with my lure tackle and left me to man the rods. It was about another 30 mins in when I herd a small beep on the wafter rod. Looking up from my phone I saw the bobbing laying on the ground and no diving birds in sight I though “liner?”
With that WHACK the line went tight and the Delkim just melted. I knew that it was another big carp. I grabbed the rod locked up and made sure this time it did not kite off to the snags. Walking back up the bank and shouting for Kyle to come I managed to get the fish into open water where it then just gave up the fight. Kyle arrived and asked me “do you think its as big as the last one?” I said “no its given up the ghost I would say around 10-15 lb mark.” Just as I said that I saw the fish for the first time and it was very apparent that it was massive. With its first surface appearance Kyle scooped the net under it and she was in the bag. Using all my strength lifting her up in the weighing sling she come it at a whopping 33 lb and 2 oz. That big mamma was my personal best and I am sure it will take a while for me to beat that. Not bad for just a few hours before work!