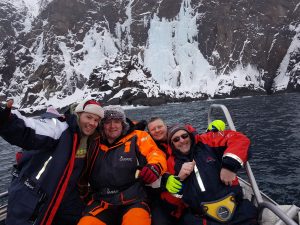 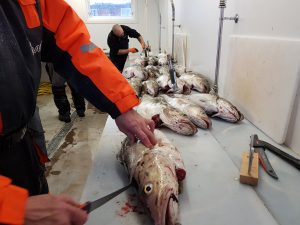 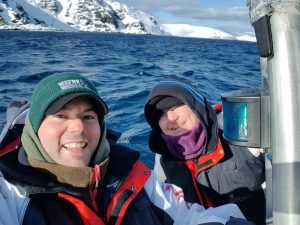 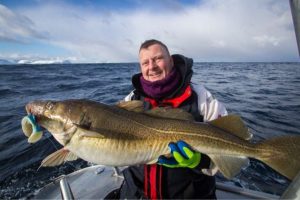 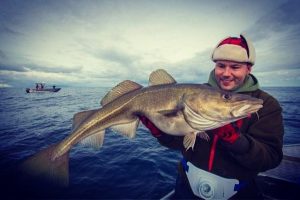 Well this what not your normal fishing trip.

I headed to Heathrow with Jason Sprigg “Kyles dad” to meet up with Grant and Mike. These three guys have all been to this dark corner of the world before and are prepaired for what lay ahead. I on the other hand had no idea what I was walking into.

>After stopping off at Oslo for the night and getting a connecting flight to Havoysund. It was this small fishing village where we would set up base camp and with everything laid out for fishing trips it was my home from home.
It was instantly apparent as soon as I walked off the coach that I would need a bigger jacket. The temperature was FREEZING!
Once settled in the next morning at first light we had some food and was ready to hit the open water. Now I would like to think of myself as an experienced angler and I have earned my sea legs over the years spending time of chartered boats, dingy’s and rock hopping. But this swell was like nothing that I had ever experienced before in my life. Waves coming at us from all angles and the boat was being tossed around like a cork in a bottle. Needless to say I was not feeling to well and despite being very sea sick I still held my rod in my hand and carried on fishing. The fishing guide took us around 2 miles off shore and stopped the boat he then shouted “they are at 80 meters” using J-brained line and dropping my crazy daisy lure down I counted the depth by the change in colour every 10 meters. As the lure made its way down into the deep dark depths I could feel it hitting the cod as the school passed by and then the inevitable tug and lunge and it was FISH ON!
The rod bent over and the pump and wind started. I noticed that even though the cod were of a monster size 20 lb plus on average they only seemed to fight for the initial 30 seconds and once you had got them up in the water columns they “gassed out” blew bubbles and they just gave up. Now I know this may not sound like much sport but you try pulling up 20 lb cod over 30 times within a few hours and  see how much your arm ache.
The next day we done the same thing and targeted the cod and once again they did not let us down. The third day we tried our luck with the Halibut. Now we had been advised that it was a little early in the season but there are a few around. With four rods in the water we had hope. It was a while before anything happened and then big Mike shouted “FISH ON!” and all hell broke lose. Mike is a lump of a man but as I looked up and saw his Shakespeare ugly stick buckle around to his knuckles I knew this was not a 20 b cod.
After a long fight Mike got the fish to the surface and we all cheered as if we were all helping him pull this beast up. It was measured and estimated to be a whopping 60 kg. The true sports man Mike is he put the fish back to fight another day and we decided to call it a day.
Also on the trip we encountered dolphins the other days saw killer whales and minky whales, sea eagles and much more. But like all good things it had to come to and end and I found myself missing this freezing tundra before I had even left it. So the talks of when is the next trip out to Norway started and continued all the way home.